They say ‘truth is stranger than fiction,’ and some of the best stories start out with, ‘No bullshit, I was there!’

So, I’ve decided to do a little something different. This was inspired by the SECOND time I’ve attempted to cook something and it didn’t go quite as planned (at first). I’m starting a new series, and I’m going to call it ‘The Blonde Chef’ - bounced this idea off of a pretty close friend of mine and she encouraged me to do it. So, here we are.

Gather ‘round the spatula, children, and I, I will tell you the tale of a crockpot and a FryDaddy. 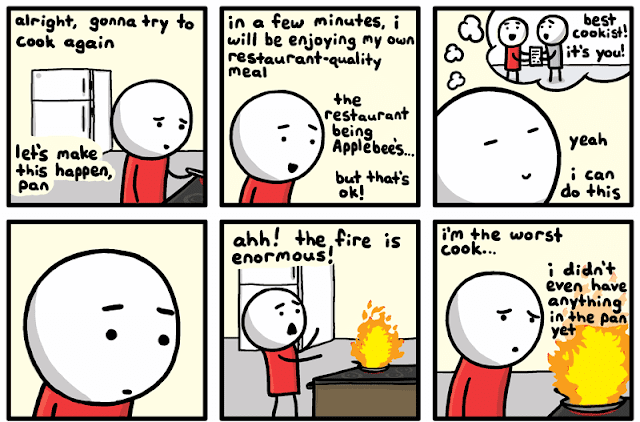 Now, please do not get me wrong here, alright. I know how to cook. I’m not completely daft when it comes to putting together something decent. I can follow a recipe pretty well. I’ve never, ever had anyone get sick from my cooking, nor have I ever, myself, gotten sick from my own cooking, either. Having said that, let’s get started, shall we?

So, the crockpot incident happened… I want to say about a year or so ago. I was making a roast and I had everything into the crockpot, got the lid on there, even plugged it in. I guess I got distracted - probably from my dog barking because of the neighbours, because a little while after getting her settled down, I went to tackle a project I’d been working on and after a bit went to check on the meat… only to find IT WASN’T EVEN COOKING. +hangs head+ I worked in tech support a long time ago, so I knew to look around for the reason before dismissing the fact the crockpot was, in fact, broken. It wasn’t. I forgot to turn it on. Whoops.

The other night’s little misadventure, I wanted fries. Like, BAD. I’m not overly fond of greasy stuff, right, so when I want something like that? It won’t knock off the nagging craving until I sate it by actually eating the thing. Tonight’s situation happened to be fries. I’d been wanting them for a couple days now – even went so far as to find out how long and what temp I’d need to put the FryDaddy on for just potatoes that were simply chopped up to be fries, since I didn’t feel like walking to the store.

I have two kitchen gadgets that have these detachable heating elements that they come with. One’s my electric skillet, and the other’s my FryDaddy. Well, I’d somehow managed to use the heating element for the skillet...on the FryDaddy, and I legit thought it was the right one to the right gadget. HA. NOPE. I’d thought something was wrong with the damn FryDaddy!! Sigh. Well, that’s alright. I did manage to figure out what’s what, and I even got smart! Yes, I did. Mhm! I took a silver Sharpie and wrote on the heating element for the FryDaddy that it goes to that gadget. Eliminates the confusion! See? Smart. Thinkin’!


And the fries? They turned out amazing. So well, in fact, I made more yesterday. Omnomnom.