'The Devil beating his wife' - what does that even mean?!

I don’t know about you, but I use a lot of really old (and sometimes cliche’ [don’t judge me!]) phrases and sayings.

For example: last week, my neighbour and I were sitting on her patio talking, and it was raining. At one point, while it was still raining, the clouds opened up, and my neighbour commented, ‘Oh, no. The Devil’s beating his wife now! The sun came out and it’s still raining!’ We sat and watched the weather shift a little and she and I pondered about the origin of that statement. How did it even come about? WHY would someone say such a thing? The devil wasn’t ever married … was he? Is he? I don’t think so. Given what he is (species), as far as I’M aware, there’s no such thing as marriage for him or any other angels. 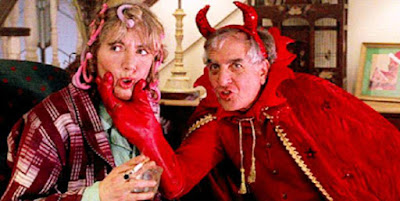 Now… Depending on who you ask, there’s such thing as marriage in Heaven (there isn’t, but some cults believe there is). Angels, regardless if they’re Heaven’s residents or they were tossed into Hell during the Fall, well… they aren’t human, never were. Marriage is a HUMAN institution designed by God, but He didn’t design it for angels to participate in – as in marrying each other. Angels are androgynous. As in, neither male nor female. ;)

I did a little snooping about the interwebs for some answers. There’s a lot of different theories, but I found one that caught my eye rather quickly. There’s an old French saying that dates all the way back to the early 1700s, ‘To go and thrash him round the church-yard, as the devil does his wife in rainy weather when the sun shines.’ To elaborate, there’s a theory that goes the sun represents the fury of Satan himself, and the rain represents his wife’s tears as he’s giving her a sound snotting.

However, I maintain what I said initially: Satan isn’t married. So. That begs the question of WHY would this saying even be a thing, then?

There are varying beliefs about what a sun shower means. In the Southern USA states, they say this saying a LOT, and it’s fairly common in Britain, as well. In other regions of the world, different cultures have their own sentiments about what sun showers mean: For example, in Germany, they say, ‘“The devil is having a parish fair,’” and in places like Bulgaria, they say ‘Tigers are getting married,’ where Arabic culture says ‘rats are getting married.’ Strange, right?

Still does not answer how come people insist the devil even has a wife for which to beat upon with whatever may be handy. So, I did some further digging, this time following the rabbit trail with the question of, ‘Is the devil married?’ and I found a really old story on the website for University of Pittsburgh. It’s an old folklore tale from Italy about a cobbler who had three daughters, and the devil seemed to go on a marrying spree of sorts. Further digging yielded a whole mess of rabbit trails that left me feeling like I’m chasing my own tail. In short: I really didn’t get anywhere with a definitive answer, leaving me to reiterate what I originally stated: Satan doesn’t have a wife. Period. No more than I am Siamese twins with Napoleon Bonaparte. It isn’t possible. 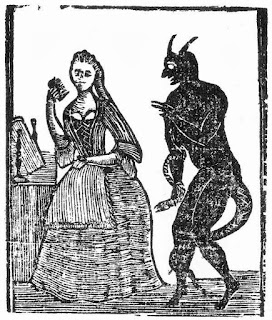