It's taken a couple weeks to get this slammed out on the keyboard, but here I am.  I attended a couple webinars put together by Shelby over at Little Coffee Fox
, and there's SO MUCH valuable information that was given, it was like drinking from a really tasty fire hose.  I thoroughly enjoyed both workshops, and now I'm here, at my keyboard, ready to rock.

There's been a few things happening in my little neck of the woods.  You know that I've lost a little bit of weight recently, and you know that I'm working on shedding more.  My goal is to have 50 pounds gone by my son's birthday in late October.  Well, ten's gone, so that's what... 40 to go.  I can do this.  I am GOING to do this.  My reward for myself is to get my hair done in a ombre dye style.

I've already got the colours picked out, there's a CVS not far from me (it's just down the street), so next up is to get down there and get a few boxes.  Yes, boxes.  I have about nine feet of hair, y'all.  Okay, totally kidding, it's more like five.  Maybe I'm exaggerating just a touch, as my cat's giving me a raised eyebrow as if to say, "Seriously?"  My hair is actually to my hips.  It's been roughly 32 years or so since my hair's been that long.  And it's THICK, so this dye job's going to be a little spendy, but it's totally gonna be worth it.  I cannot wait!  I'm also hoping to get a tattoo this weekend, too.  HOPEFULLY it'll work out. 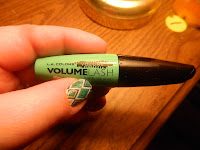 Right now, I'm sitting here just trying to wrap my head around all the changes that I've made, and the ongoing makeover I have decided to give myself.  I mean, check it:  I'm wearing more makeup lately.  I spent like $6 on makeup the other day.  I didn't buy a horde of it, but I did buy some nice stuff.  I even purchased some mascara, which I've not done in a long, long time.  Last year I'd learnt from a friend of mine how to put it on without aggravating my eyes.  Doing that, I don't even notice I have it on, there's no itchy eye action happening, and I don't look like I've been slugged in both eyes as a result. 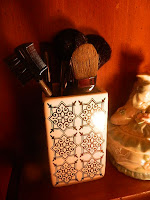 I recently wore makeup and a nice shirt and jeans, and I was asked where was I going all dressed up?  Why was I dressed up for?  My question is:  Why do I need a reason to dress nice?  What's wrong with I wanted to look and feel good?  What's wrong with I might've been feeling kinda down, and that's how I opted to boost myself up a little?  Why do we make each other have reasons for stuff we do?  Doesn't make any sense. 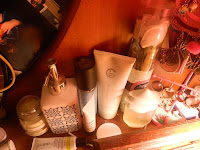 I mean, I own stuff to make myself look and feel good (not to mention smell pretty lovely), why not use it, right? 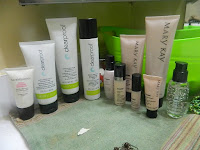 Surely, people are used to seeing me in jeans and a t-shirt, or shorts and a tank top, but I'm trying to dress more like I have something to do than just clean my home and sit around with Netflix all day.  A friend and fellow writer told me once that it's some kind of scientific thing that if women were to wear a bra during the day, they're motivated to get more done........or something.  I can't remember how she phrased it, and I'm not going back over a year's worth of conversation to find the EXACT statement.  There, I gave you something to google in your spare time, ladies.  Nonetheless, though, like a lot of women, my chi-chis need ... supervision.  ;)  If left to their own devices, they tend to get to wandering and it's quite embarrassing!  Wearing a comfy bra more often, it's led to other changes I've wanted to do.

Trying new things with my hair. 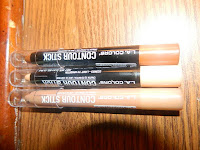 Trying new makeup (as in, yes, I bought a contour set!).  Trying out new and interesting ways to wear colours rather than my typical black or grey shirt you mostly see me in.  Stuff like that.  Over the past ... I wanna say couple years or so, I've been slowly building a small stash of makeup.  I used to not want to wear it at all (I mean, would YOU if all you were told growing up is how much of a 'whore' you look?  Yeah, I thought not!).  I've been working hard on taking that power back.  At the end of the day, I know I'm not what I was constantly bashed into believing of myself all my life.  God knows, too, and that's the only opinions that matter.  God's and mine.  Well, Shawn's is nice, too, but he doesn't say disparaging things to me or about me, either, so there's that! 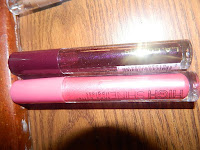 I'm pretty pleased, though, that all these changes, though gradual, are happening at a pace I can handle.  Things that I have some semblance of control over, and I'm quite fine with this. 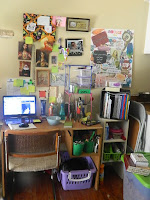 Last night, during the webinar catch-ups I was doing, I listened and took notes and tidied up my desk a bit.  Now it looks tolerable.  LOL

I've even got a nifty quote I found on the interwebs yesterday that's currently copied and taped to my laptop, to the side of the monitor:


You want to be a writer

It's all you've EVER wanted to be.
It's what you spend all this time on,
Training and practicing your craft.
Get off your ass and write your page
AND QUIT CRYING ABOUT IT!.

Come to think of it... I saw some nifty stuff on Netflix that's been uploaded and new, so I'm out to do that and make good art all over my notebooks and journals!  Toodles!
Email Post
Labels: books child abuse childhood creativity dream femininity green honesty husband I'm finished love muse negativity new journal photography relationships tmi writing