Recently, my neighbour gave us her huge crockpot, as she's moving soon.  I mean, this thing was big enough for my little 4qt, plus it still had room.  heheheh

It's a lovely (and HEAVY) kitchen gadget.

Now, anyone who really knows me, I tend to be a bit complacent when it comes to certain things.  I find something I like, and I stay with it until I get bored, or curious, to see what else is out there.  A lot of my random recipes have come from, "What if..." and I've learned some new and interesting things.  Like, for example:

↣ did you know that chili powder mixed in with brownie batter, when the batter's still BATTER, it's not bad.  Now, when you bake the brownies with aforesaid chili powder, it's disgusting.  Just.......trust me.

↣did you know that if you chop up potatoes, throw in some kielbasa (also chopped), and different seasonings (my go-to seasonings for this delightful dish are chili powder, Cajun seasoning, onion powder, garlic powder, a little garlic salt, black pepper, and sometimes some Soul Food seasoning) into the crock pot for about 6 hours or so on high, it's really tasty!

↣ did you know, if you make a grilled cheese, and sprinkle a little garlic salt on the buttered side of the bread (both sides of the sammy) and fry it like you would do a grilled cheese sammy, oh, it is wonderful!

Thing is........ complacency seems to have set in, just a little.  Last week, I asked for some ideas for meatless dishes (it's Lent, after all, and eating meat on Fridays is kind of a no-no in my faith).  One of my fellow author friends offered a really neat idea for chili!

Now, I looooooooooove me some good chili.  LOVE.  IT.  However, the ONE time I tried to make some.....  It was so horrible!  EW.  That was 4 1/2 years ago.  LOL  My friend's recipe calls for beans you don't have to soak overnight (which is wonderful news to me, because I don't like to wait!  I'm all about immediate gratification.  Just sayin').

Tonight, we picked up ingredients for chili that I'm going to be making this weekend in the crock pot (because I LOVE crock pot cooking!!!).

I was telling my husband tonight as I was searching for chili seasoning mix, "I doubt one could really, really mess up chili.  I'VE DONE IT, but I doubt this time it's going to be awful."

That is, of course, my hope.

Below are the ingredients we've chosen to use. 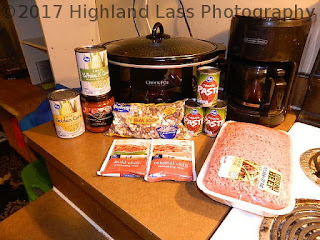 Obviously, the coffee maker isn't part of the recipe.  ;)  But, you see how big that crock pot is?  I mean, WOW.  LOL  It's big enough that I had to swap my cats' food bowls/plates from THIS counter to the counter below (to the opposite wall of this counter), because I really don't have anywhere for the coffee maker to be, because I have three cats and they like to knock stuff over.  They've knocked that coffee maker over a few times when it was on what's now THEIR counter.  lol  Since it's been up here, they've not touched it.  Maybe they were trying to tell me something? 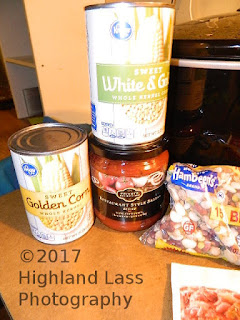 So, as said, I love me a good chili.  There's so many different ways to throw something like this together, but every time I've had any variation, it's had a kick to it.  Being we like a good spice to our food, we've decided to add some medium-grade salsa to the recipe (since I REFUSE to put stewed tomatoes in there.  Grosssssss......).  For a little colour, we're putting in two kinds of corn:  Sweet golden corn and Sweet White and Golden corn. 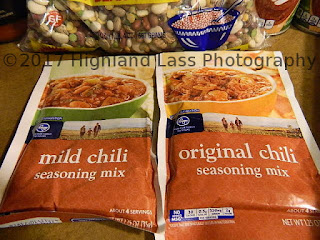 Naturally, when making chili, you gotta throw in some chili seasoning mix!  Since we're trying our own thing with this, we're using mild and original flavour seasonings. 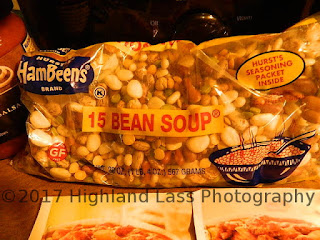 Now, this, right here, this is what my author-friend told me about.  These beans, you don't need to soak overnight (thank you, Glenda, for the recommendation!).  I was pretty pleased (okay, there was excitement being had in the bean aisle at the store.  I couldn't help it.  LOL) to see that they carried these, and they were sooooo cheap!  Less than $3! 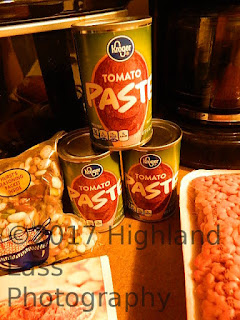 To thicken things up a little, and yeah, yeah, yeah, gotta have SOME sort of tomato something in the mix, I am adding tomato paste.  I love tomatoes, yes, but stewed?  That's a no. 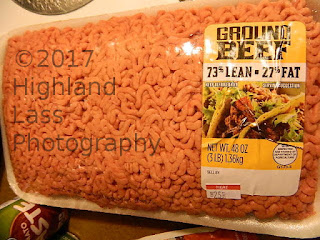 And what's chili without meat?  I have a griddle, this is gonna get thrown on there and fried up and thrown into the mix when I put the ingredients all into the crock pot Saturday morning.  Gonna include some other spices and seasonings into the meat while it's cooking, too, and once it's browned and drained, I'll mix it all up into the cooker and leave it be until Saturday night!  ^_^  I can't wait!
What about you?  What sort of slow cooker recipes do you enjoy?  Feel free to share 'em with me in an e-mail.  ☡
Email Post
Labels: creative cooking creativity crock pot husband kitchen shenanigans meat pinterest potatoes recipe yummy