Anyone else have this problem?

I'm a member of Writers Night Quills on Facebook.  It is, as the name of the group suggests:  a group for writers to get together and discuss all things writing.

Yesterday, I cleaned off my desk, and completely revamped my work area.  A friend of ours gave me a small shelf that I was initially going to put on my desk, but upon doing so, I realized I would have really NO room to work with, so I decided to do something else with it instead, which cleared up a lot of precious real estate on my desk to be able to do other things like bullet journaling, morning pages, and the like. 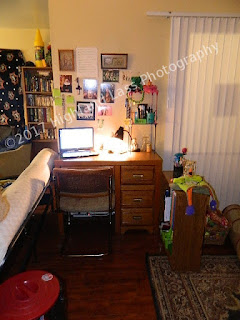 My desk now has a lot more room to work with, because now things aren't so cramped together.  It's a little desk, so I have to be careful with how much of what I put up. 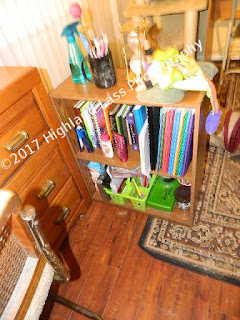 This is the shelf I received from a friend yesterday that took up way too much space on my desk, so now it's kind of "off set" on the floor so I can easily get to folders, bullet journaling supplies, and the like. 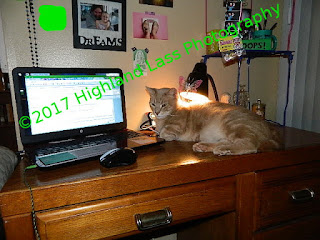 While I was trying to discuss some things in the chat room with my fellow writers, Tommy (shown here) decided, "Oh, Mom's got space enough for me to go lounge!  This is great!"  He's not a real big cat (he's about average size), so it's not like he takes up a LOT of room, but he can be a bit.........disruptive.  ;) 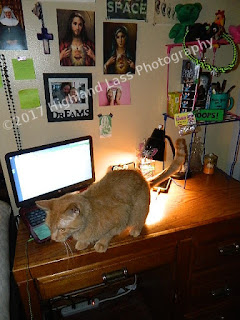 Once Tommy decided he'd had enough of trying to get in my way, dominating my field of vision with demands for attention and at one point eying my screen like he wanted to try to attack the cursor as I typed, I was able to get him to move, and then Connor (shown here) decided HE wanted in on the fun.

I think they're trying to throw a not-so-subtle hint at me that they want to be in my next novel.  Hmmm....
Email Post
Labels: adopt don't shop adventures in pet parenting angels assisting felines animal rescue animals behaviour bullet journal cats creativity have you hugged your cat today? love muse photography writing