Well, then.  I've just realized it's been a little bit since I've pounded the keys and updated this page.  I am a slacker!

It has been a nonstop flurry of activity around here these past few weeks.  Seemingly it's been a never-ending cycle of "Go here, do that, take care of this..." but I have been pulled so many different directions BUT the direction in which I'd like to be the most.

All that aside, though, I've got two protagonists from two entirely different WIPs in my head having an argument over whose turn it is to have their story written.  I've got a teenage girl and an eternally twenty-something male screaming at each other.  You ever hear two adolescents going at it over whose turn it is to use the bathroom mirror?  Yeah, that's what it's like in my head.  LOL

And then THIS little gem pops up in my inbox just a little bit ago: 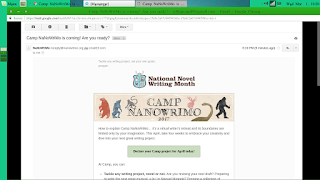 SO, I think I'm going to go with a compromise between these two little buttheads having a go at each other.  I'm going to deal with both of them, a little at a time.  I may not get both books written to completion by the end of April, but you know what?  IT'LL BE A START.

Some other things, too, I've got in the works:  a makeover for my blog.  :)  Yes.  I'm designing a 'landing page' for this site so it looks a bit more.. organized.  I'm going to get that taken care of TODAY; I've got the pictures done how I want them to look for the links.  Now it's a matter of getting the codes situated.  Good thing I love a good challenge, right?
Email Post
Labels: "make good art" accountability camp nanowrimo coding creativity honesty html muse writing