First, I linked my Tweaky Muse blog to my Goodreads page.  :)

Second, I got an e-mail about six hours ago about NaNoWriMo.


+cue the anxiety!+  +cue the panic of where to start first on my planning!+  The book I am writing, it started out to be an idea for a short story (about 5,000 words) back in June for JuNoWriMo.  The original plan was to take ten writing prompts and write short stories about 5,000 words each.  Grand total?  50,000 word book.  Goal, achieved.

That was the plan.

It did not work that way, however.

First writing prompt... I hit a dead end just a few sentences in, because my muse was throwing a colossal tantrum.

Second writing prompt.... the story took me to a place where I had to stop, because much research is needing to be done.  I am generally a pantser!  I do not plan stories!  The horror of it all!  Me.  A pantser.  FFS.  This means outlines and ... and ...  dare I say it?  TALKING TO PEOPLE.  ASKING QUESTIONS.  These are things that I do not do easily.  Thanks a heap, muse.  Thanks a heap.

So, that story got set aside.  I think you all already know by now how my first book, Writer vs Muse:  The Struggle is Real! ended up coming into fruition.

The goal is to pick up the story I started (sort of?  It was a blurb I wrote for a fiction writing class I took online a few months ago) and breathe new life into it and expand on it.  There's only 280 words to it right now, but that'll happen later.  Again, much talking to people and asking questions needs to be done on that one, too.  That one's a little easier, though, to worry about, because of the subject matter not only is going to be a lot of fun to write about, but it's also going to open the lines of communication up between myself and some friends that I've not talked to in awhile.

This one that I'm wanting to focus on for NaNoWriMo, though, this one I'm really chomping at the bit to get started on, despite the fact I have to put on my big girl pants and deal with that pesky research thing and the pesky outlining thing.  Do you know how long it's been since I've had to outline for a story?  Yeah, we're not going there, alright, it's been awhile.

Nonetheless, though, I've signed up for some interesting things through school that should (hopefully) help, and I've got an acquaintance whose husband's in law enforcement, I've got a friend whose father is a lawyer, so it won't be too bad.............  I hope.  +sniffle+

And that paragraph, the one right above this one, is the only hints at what this book is going to be about.  Speculate if you must, but given how things turned out with my first book, well, I'm doing this to protect myself and my psyche.  There are an unnamed group of individuals who have been hand-selected by myself to be beta readers.  No one of these individuals has any idea who any of the others are.  Yeah, it's like that.  Total nondisclosure.  Has to be this way, thanks to how things worked out before.  I'm not going through heartbreak again.  By strangers is one thing, but by people that I know?  Nope.

I'm not even sorry about that.

There will be an announcement as to what the book's title and when it's published, of course, and it will be reasonably priced, and those individuals who choose to purchase it, but disregard it, that's alright, but they paid for it and I still get paid for my hard work.  And yes, writing is hard work.  I promise you that.  It is time away from family, friends, it is long days of eye strain, a numb backside, slow onset of carpal tunnel, it is arguments with one's inspiration, it is keeping the coffee industry well-supported, it is all kinds of stressful.  But at the end of the day, it is worth it.  And I am unwilling to give freebies again to just have my work tossed aside like it doesn't matter how hard I worked on it.  So, I'm going to be comped for my time, regardless if the person who purchases it reads it or doesn't.

I still get paid for my effort.

Given all I went through in June with my first novel, I'm quite pleased, though, that I did not fall into the stereotype of writers being alcoholics.  It's too expensive, but I'm also still pretty well attached to my liver, so there's that.

At any rate, though, November's going to be one helluva month to get through!  Not only the writing, but there's Thanksgiving to survive.  Lord help me.  LOL  Good thing, though, that it's just me and my husband, and MAYBE a small group of people if we choose to do anything beyond just he and I.  I need to talk to him about that.  I think if we do, though, that'd be the ONE time I bother with taking a break from work to be social.

Anyway, here's hoping that I survive with most of my hair in tact!  ;) 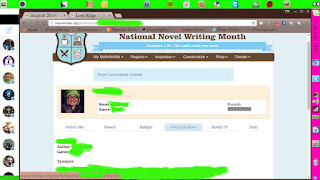