Second Wednesday of Advent 2019 (a little late, but I explain why. read on!) 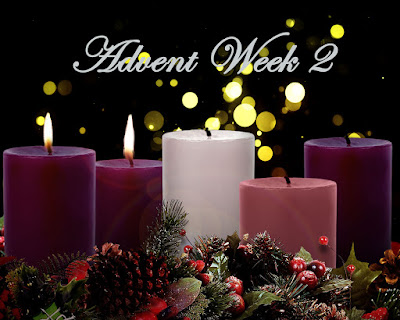 Pause. That word… We throw it around a lot, don’t we? ‘Honey, pause the film, please, I want to go grab some water.’ ‘Pause here, I want to expand on this a little bit to clarify a few things that are happening in this chunk of text.’ ‘It’s too bad we don’t have a pause button for the kids so they can settle down for a few minutes!’


Pause. It’s true, life doesn’t come with such a thing, does it… And yet… it kind of does. We just don’t acknowledge that it does. 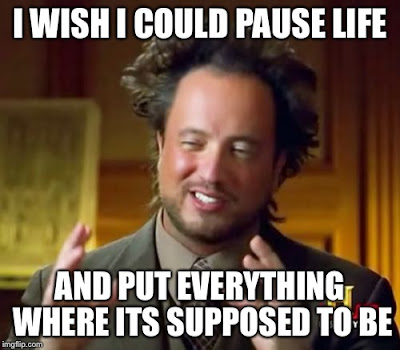 For someone like myself, a pause button would be amazing. To shut the whole world off for just a few minutes so I could catch my breath. So, I’m going to take a second and be raw and open with you and tell you something serious about me: I have anxiety issues. I have for a long, long time. Things get to be too much, my world gets to be too loud, and I shut down in a panic because I don’t know what else to do.

But, thinking about the Gospel Reading for today, it reminds us that our Beloved Lord does, in fact, offer us a pause button. ‘Come to Me, all you who are burdened and heavy-laden. I will give you rest.’ In a real way, this is our Beloved Lord inviting us, calling us, not only to a relationship with Him but a conversation with Him. In the Catechism, it says,

‘MAN IS IN SEARCH OF GOD. In the act of creation, God calls every being from nothingness into existence. “Crowned with glory and honor,” man is, after the angels, capable of acknowledging “how majestic is the Name of the Lord in all the earth.” Even after losing through his sin his likeness to God, man remains an image of his Creator, and retains the desire for the One Who calls him into existence. All religions bear witness to men’s essential search for God.

GOD CALLS MAN FIRST. Man may forget his Creator or hide far from His Face; he may run after idols or accuse the deity of having abandoned him; yet the living and true God tirelessly calls each person to that mysterious encounter known as prayer. In prayer, the faithful God’s initiative of love always comes first; our own first step is always a response. As God gradually reveals Himself and reveals man to Himself, prayer appears as a reciprocal call, a covenant drama. Through words and actions, this drama engages the heart. It unfolds throughout the whole history of salvation.’ – CCC 2566-67

While in most cases, the words ‘pause’ and ‘rest’ aren’t always synonymous with each other, when life gets to be too much, ‘rest’ can be a wonderful way to shut everything off and just be.

‘Come to Me, all you who are heavy laden, I will give you rest.’ All of us. Our Beloved Lord is inviting all of us to come to Him for that sweet peace He’s offering us. We, as people grow weary with all the things we have to do on the daily, but we forget that our Lord does not grow weary of anything, as Isaiah reminds us (Isaiah 40.28). He is strong and can carry us in His Hands as long as we let Him.

‘Earthly peace is the image and fruit of the peace of Christ, the messianic “Prince of Peace.” By the Blood of His Cross, “in His Own Person He killed the hostility,” He reconciled men with God and made His Church the sacrament of the unity of the human race and of its union with God. “He is our peace.” He has declared: “Blessed are the peacemakers.”’ – CCC 2305

Reader, the last 24 hours for me have been quite messy and loud. As someone who has the cross of anxiety, it’s not easy for me to not shut down in a panic by default. It’s also not easy for me to speak up when I need help. But, tonight, I couldn’t take anymore and I reached out to someone I know and asked her if she could come earlier than we’d originally planned for her to come over to help me with something I’m paying her to do for me. She came right away (thankfully she lives just a few yards away)… She was having a bad day of her own, so we got through our own bad day we each were having, together. We each had a rant about what was happening in our own worlds, and by the time she went home this evening, we both felt a bit better. I don’t feel ‘rested’ per se, but I do feel that the load I was carrying, and I hope her load she was carrying, is lighter. Maybe not completely off our shoulders, but we have a lighter load, each of us, and that’s better than what we’d initially started with.

‘When we pray to the Father, we are in communion with Him and with His Son Jesus Christ. Then we know and recognize Him with an ever new sense of wonder. The first phrase of the Our Father is a blessing of adoration before it is a supplication. For it is the glory of God that we should recognize Him as “Father,” the true God. We give Him thanks for having revealed His Name to us, for the gift of believing in it, and for the indwelling of His Presence in us.’ – CCC 2781 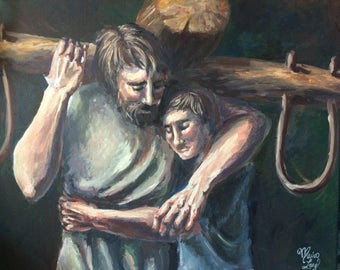 ‘My yoke is easy, and My burden is light.’ A lot of times, unfortunately, we lose sight of the fact we are not alone in this life, and even if it’s just reaching out to a neighbour to lend a hand, or if it’s something where it’s serious enough where a person just needs an escape from a fight they had with a partner, we lose sight of the fact that those little moments are answered prayers we ask in the deepest depths of our soul. Where we don’t even realize what we’re saying, but God does, and He comes running to help us. We don’t generally keep Him in the equation, unfortunately. We give all credit to the other person, but not to God for arranging things where our situation is eased off our shoulders some. When He’s saying this, what He’s telling us is He enters into that situation we’re dealing with, and He lifts it up a little bit so we can stand a little straighter. He’s taking the bulk of our weight off and He’s saying, ‘I’ve got this, it’s okay. You’re going to be fine.’ 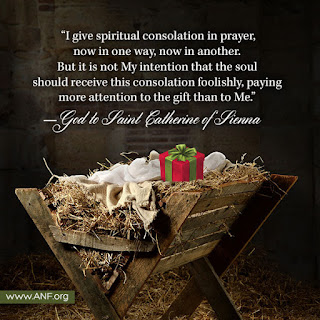 Reader, when our Beloved Lord came to earth in Human Form, it was most assuredly not because He was bored, and it definitely was not because He was sick and tired of us not listening to Him. He did it out of love. He did it out of a sense of Parental Joy to draw us in, in such a way where we would feel comfortable enough to approach Him. He set aside His Glorified Form to be with us in the most intimate way He could. Because He cares that deeply and loves us that overwhelmingly to bring us to Him. Doing this, it’s to show us, ‘Hey! You are comfortable going to another person, so I’m going to take on Personhood and help you feel more comfortable in confiding in Me, too. I’ve got you.’

Reader, I had this whole other article written about today’s readings, but after the events of last night and today unfolded, I felt that that wasn’t written well enough to fully show what the Gospel Reading taught me in my own world. 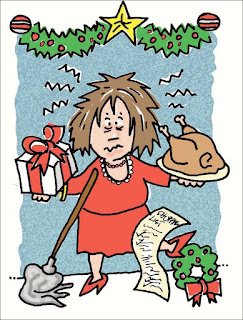 I feel like with all the Christmas prep we’re all going through – whether it’s trying to figure out where we’re spending the holiday if it’s at Grandma’s or Auntie and Uncle’s, or even a restaurant so we don’t have to worry about fickle guests griping about what’s on the menu for the dinner at home, everyone can order what they want and everyone’s happy, or if it’s we are hosting at our own home and people are coming to us, so it’s time to scramble and get the house nice and tidy so people can come in and make comments about how neat and shiny the baseboards are (sorry, couldn’t resist.) – I know I and my neighbour are not the only two people in this little planet going through chaos and frustration right now trying to get things organized. I know there’s someone else out there, probably all of you, maybe only a handful of you, I don’t know, who needs to see that we complain we don’t have a pause button for our lives, but to highlight the fact that we actually do. We just don’t dare take the opportunity to experience it and to enjoy it for what it is: our Beloved Lord wanting to pull us onto His lap and wrap His strong Arms around us in the warmest Embrace we could ever know and whisper into our ear in the sweetest Voice, ‘I have you. It’s okay. Just stay here and rest awhile. Don’t worry. It’s all going to be okay. You’ll see, I won’t abandon you to figure things out on your own!’ 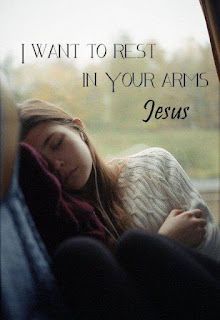 This holiday season, as we get ready to deal with all the stuff that we face – whether it’s trying to organize a venue where the dinner will be hosted, where we will go to Church, whose Church we will go to, if it’s the Protestant Relative or the Catholic Parent; whether it’s the difficult relative who always has to bring up political discussion at the table to stir up drama or the rebellious child coming to the table looking like they just stepped out of who-knows-what and glowering at everyone – let’s remember that there’s Someone Who is there, waiting and has given us that pause we can retreat to if it’s only a few minutes or an hour or even longer. He’s there, He’s listening, and He loves all of us and will help us with all of our stuff. 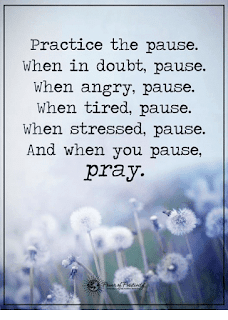 ‘...A humble and trusting heart that enables us “to turn and become like children”: for it is to “little children” that the Father is revealed.

[The prayer is accomplished] by the contemplation of God alone, and by the warmth of love, through which the soul, molded and directed to love Him, speaks very familiarly to God as to its own Father with special devotion.
Our Father: at this Name love is aroused in us … and the confidence of obtaining what we are about to ask… What would He not give to His children who ask, since He has already granted them the gift of being His children?’ – CCC 2785

As St Alphonsus de Liguori once said, ‘What does it cost us to say, “My God, help me! Have mercy on me!” Is there anything easier than this? And this little will suffice to save us if we be diligent in doing it.’

In what ways do you reach out and ask Him for His help?
Email Post
Labels: advent week 2: PREPARE