It's Mental Health Awareness Month... Let's discuss being mindful in our vernacular!

It’s already May. Can you believe it, reader? That means the year’s half over already. It also means that this is Mental Health Awareness Month. Nothing short of ironic that my patron saint’s feast day is on the 15th. :) 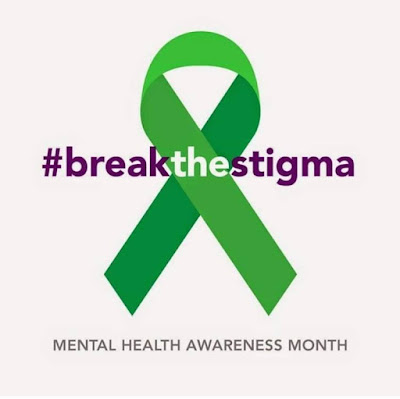 I want to discuss Mental Health, and in some cases, as is the case with yours truly, mental illness. With this, I want to bring to the forefront of the conscience about the vernacular that’s tossed about a little too freely when labelling something or someone as ‘crazy’ or ‘being OCD’ or ‘psychotically paranoid’ (an eye-twitch and rage-inducing statement I hear WAY too much about things that have absolutely nothing to do with that statement…), and any other variation therein.

Dear reader, I want to discuss something that’s going to make me the ‘least popular person in the room,’ but not to worry: I don’t really live, breathe, and die by the opinions of me in others’ minds. ;)   Were I to do that, I'd not get a single thing done with my day.

Nonetheless, people, we gotta talk, really have a conversation here, about mental illness and what that entails.

There's been a lot of topics in magazines and newspapers about 'mindfulness', which is just a fancy-schmancy way of saying, 'Stop.  Breathe.  Be.'  That is not limited to Yoga or Christianity, Mormonism, Jehovah's Witnesses, or even Paganism for that matter.  It is something we, as a humanity, need to do, at least a few times a day.  There's nothing wrong with taking just a five-minute mental break.  If you can't leave your tasks, just close your eyes and breathe deeply for a few minutes until you feel calm.

In situations, like mine (I work from home so I can work wherever and whenever without a boss breathing on the back of my head and boring holes in my skull about my productivity [or lack thereof]), if you feel the need to do so, go for a walk and just leave your phone or whatever electronics home (or on silent) so you can have a break.  There's no shame in hiding from the chaos of life for a while!

Recently, I had to suffer through a conversation that had my cursor inching toward the 'x' to close the window on the Google Hangouts window to end the conversation with a rather inconsiderate individual.  This person, who shall remain name- and gender-less for the duration of this post (the incredibly guilty party knows exactly who they are), is CONSTANTLY not thinking before they speak, using words like, 'I'm psychotically paranoid' when it comes to certain things, or 'now to be paranoid about x' and I had to chastise -gently- that statement.  This person, in turn, got butthurt a bit (no surprise there), when I asked them if they understand why I am busting their proverbial statement apart and telling them, 'this is not okay.  Mental illness is not something to just take lightly.'  I was told, 'I SAID, I GET IT.  I have friends who are mentally ill.'  Yes, yes, you do.  I know of, counting myself, there are at least three others in your world who are.  Again, no names will be mentioned.  This person, I have known them a long time now.  We've seen each other through some seriously wild situations.  I am grateful to this person for all that has been done, but at the same time, when this person tosses things as such were mentioned in this paragraph about like volleyballs, it's not okay.  And then to get an attitude problem with me about being called out...  While I am impressed that they owned their mistake, it is yet to be seen if they will try to fix their disgusting behaviour.

This isn't some kind of joke to be laughed about.  No.  This is something very painful and it should be taken seriously.  It is tough to get up every day and face a new day.  It's hard to deal with sudden changes that come with life and have zero warning to be able to prepare oneself.  It is also painful to try to survive each day as unscathed as possible without nonsensical statements as such that people toss about without consideration to what they are saying.  Paranoia, Obsessive Compulsive Disorder (OCD)...  Psychoses of ANY kind...  These are not just, 'Okay, Mr Johnson, you have the flu.  Here are some meds, sleep it off, stay hydrated, you should be fine by the weekend.'  It is not a casual conversation thing, either, 'I'm so paranoid about my [whatever] needing to be done!'  Making light of a difficult illness (just because these aren't seen don't mean they don't exist...), it really is not okay.  In any capacity.

Mental illness has been around for a long, long time.  And yet, the stigma still runs rampant, to this day.  Yet, also, we say things like, 'x person is "crazy"' without thinking twice about what we are saying, or in such case as mentioned above, the eye-twitch-inducing conversation I had to suffer through, someone saying they're 'paranoid' in any variation.

We toss these words about without even a second consideration for what we're saying, and more than that, a second consideration about the populace it affects on a very real and personal level that the person saying these terribly inconsiderate things have no idea the struggles that come with these types of woes.  Trust me when I tell you, it is not a laughing matter, at all.  Sure, there are comedies out there about this - One Flew Over the Cuckoo's Nest is such a film about mental disease - but does that mean it's alright to make a joke of this type of ailment in everyday speech?  Absolutely not.

Listen, the point I'm trying to make here is simple:  What you say may be funny to you or just something that you 'just say to be saying it,' but you need to watch out what you say because if it's something serious like this, it's a very real and very excruciating thing for those who do live with it, as well as their loved ones who have been and are with their loved ones through each panic attack, each nightmare, each situation where they're legitimately paranoid for some reason that they cannot explain.

In short:  Don't be a jerk.  Watch your mouth.  You never know what you think is just common-speak could be something someone struggles with on the daily and doesn't have a way to escape their intrusive thoughts.

It is so easy to be a jerk, but it takes a decent human being to keep their tongue in check.  Which category will you fall under?
Email Post