Several Songs That Remind Me of My Youth

Ah, music.  It has the capacity to make us laugh, cry, think.  It has the ability to invoke so many memories, even after a long time has passed. In the movies, it can cause a warning that says, 'Hey, something's coming up that you need to brace yourself, viewer, because it's big!' or it has the ability to further the comedic experience in a scene.

Recently, I was sitting here just listening to music on my Spotify and came across some interesting tunes that brought back a lot of crazy memories from the time of when those songs were popular on the radio.

One thing I have always loved about Spotify is how they have these different playlists that they come up with, 'Time Machine' type playlists.  Here are ten songs (in completely random order) that I've found on Spotify I've long ago forgotten that still manage to invoke memories from childhood and early adulthood for me (and for the sake of playability and the fact that not everyone uses Spotify, I'll use YouTube):


- I remember the last day of my Freshman year of HS.  My friends and I were walking home from school (yay for early release!), and we were just celebrating being kids.  It was a nice day out, and my friend's brother was with us.  He was horsing around with another cat that was with us, and he blurted out, 'You know that song "I Got the Power"?  Well, I got the book, man!' and starts pretending to box his friend about the ears and shoulders with a book he had.  Not hard, but just being goofy.  Every time I hear this song, I think of that moment and laugh.

- This was the song we sang at my HS graduation.  I remember when we seniors were trying to decide which song we wanted as our 'class song,' and there were some really good ones being voted on.  How we ended up with this one, I still haven't a clue, but I was in the choir that year, so it was kinda weird being someone singing at her own graduation ceremony (granted, no, I wasn't the only one singing, thankfully, but still!).

- including this one for a buddy of mine (have a laugh!  haha).  I don't quite recall when this one came out, but I remember being in SoCal when it was super popular...  I remember, too, they used it for a video game commercial (which one, though, the title escapes my memory, sadly).  This song... I can't listen to it and not cringe.  I mean, the style of dress back then ALONE was disturbing.  (and bonus:  here's a really bad picture of me as a fifteen-year-old...  Cue the FoS jokes!).  SMH.  Yeah, that was me Sophomore year of HS.  Haha 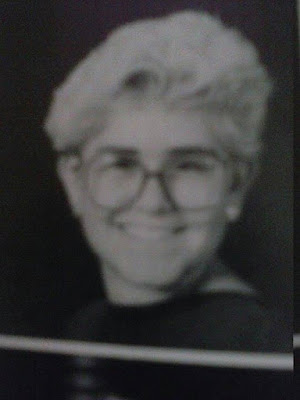 - So this one!  Cyndi Lauper was one of my favourite singers back in the day.  She was so much fun to watch in music videos (I confess, it's still to this day a blast to watch her music videos!).  I had to include it.  After all, what's a music roundup from my youth without her included, right?

- When I was in I think 11th grade, my choir teacher was the bus driver who had taken a bunch of us to the Choral and Ensemble contest in Spokane, about two hours away from where we lived.  We had so much fun.  On the way back, we started singing this song, and then included Mr C in it, saying, 'Chadbourn!  Wiggle it!'  So he took his right hand off the steering wheel of the bus and started wiggling a pinkie at us.  We all just cracked up laughing.  I miss Mr C.  He was a wonderful person.  He passed away a few years ago, but he will always have a special place in my heart.

- Oh, Expose'...  The overuse of the synthesizer in the 80s...  It astounds me, it truly does.  And don't even get me started on the hair and the clothes...  Yowsa.  What were we thinking back then!

- Gerardo!  THIS guy...  He was smarmy, he was pretty, and man did he have great hair!  I always did wonder what happened to him.  LOL

- This song was super popular for a long time.  Looking back, he looks like a Cuban Ludacris.  ;)  I loved MMA back in the day, I think he was a big reason why I started getting into Latin music.  The mix of English and Spanish, of course, Gerardo helped further that fascination along, but this guy I think is who started that weird curiosity in me.

- These guys were really popular when I was a Freshman.  I remember getting the album this song is on, in cassette form, for Christmas that year.  As much as I listened to it, I'm shocked my cassette deck didn't eat the tape!

- We all have that one song, that ONE SONG, that triggers memories of that guy who broke your heart, or that girl who caught your eye but denied you the time of day.  For me, Tommy Page is one such artist that invokes those old pubescent memories of unrequited love soaked in hormones and silly posters and gossip-sessions with friends over lunch.  I'm now in my 40s and I still can remember at least two boys from my adolescence that I was quite taken with and I hear Tommy's voice and it's like I'm back in my teens again.

- Hahaha this one!  So, a fun story about this song (and I know she's going to be all manner of embarrassed...  Sorry not sorry, Iris!  If you listen closely, Reader, you can hear the blood rushing to her face as I'm sure she's reading this, too!),  This song... When Iris and I were in eighth grade, we went to a school dance.  There was this one boy she was especially smitten with, his name was Israel Winterode (yeah, I can still see that smirk of his in my mind's eye...), and she got to dance with him for this song and Bon Jovi's 'I'll Be There For You.'  We, as her girls, never, ever let her live that down.  Even now, Iris and I are in our 40s and we still talk about that and can remember it just like it just happened two days ago.

- These guys were popular right around the time I graduated.  I remember hearing this at a wedding I went to not long after graduation.  I remember dancing with the guy I went with, he was my boyfriend at the time, and it was his sister's wedding.  She made a gorgeous bride.  Every time I hear this song, I think of what a beautiful and peaceful day that was.
Email Post