Philosophy, Auntie-Grannie!, and other ponderings...

Here I am. I'm gearing up for NaNoWriMo next month, and I'm really excited. I've been taking my time getting things in order, and so far, it's going well. A few days ago, I reached out to the people in charge of my program and I've asked if I can hold off taking the next course before the big Capstone project until December. I want to have time (and energy) for both work AND play. Not that I really go anywhere interesting in my 'off' times, but nonetheless. :) 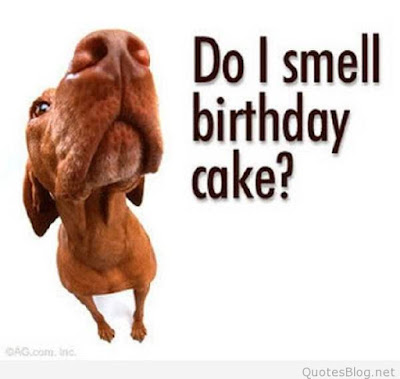 So, recently, I had a birthday. This time of year is difficult for me for different reasons, but it's also right around the time I decided to start writing. I was thinking about this over the course of the last several days. When I started writing, I was barely five years old. There were some pretty toxic events going on in my little life, and none of them I had any control over, so I did the one thing I could: I escaped into my own imagination. I nurtured it as best I was able, given how young I was, but I enjoyed coming up with all kinds of stories. I came up with stories for my stuffed animals and my dolls. I played 'school,' and I had come up with a whole world of back-stories for my little stuffed friends, and that's what got me through each day.

Thing is, my reason for writing started out of a need to understand not just the world around me but trying to figure out who I was as a person. I still think about that, 'Who am I?'

I'm sitting here writing this and not sure where I want to go with not just this post, but with this blog. I've been thinking about it a lot. There are a lot (a LOT) of different advice blogs, right, and there are a LOT of different artistic ones out there, too. 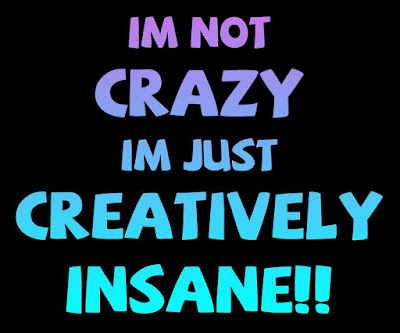 My domain, 'Crazy Creative Life,' says a lot about me with three little words. I don't go out very often (if I can stay home, I do). Some of my favourite things to do are take photos, write (of course), and learn about different things. So, I'm going to start sharing about things I've learnt, things I'm working on (maybe even a few glimpses into my NaNoWriMo project if you're lucky haha)... Might help me to finally get out of this weird haze I've been slipping into for the past couple weeks.

There are a few things I've been mulling over the past few days, and today's really no different. Since my birthday, I've been listening to a LOT of Venerable Archbishop Fulton J Sheen's talks. The guy was brilliant. I am not even joking when I tell you, I am kind of a big fan of his. I love listening to him speak, the way he delivers each sentence.

Lately, I have been puzzling through some things that he's been talking about, and he's pretty amazing. Here's a little gem for you:


He's got several other statements that he's made that have really gotten my attention.

And then, there was a little something that grabbed me the other night that made me pause. A very close friend of mine asked of me something extraordinary that I'm pretty emotional about. Nothing bad. My friend asked me if I'd be willing when the time came for children to be brought into the world (whenever that may be), to be the child(ren)'s ... and couldn't think of the word. I said, 'It's commonly called a "Godparent," kiddo.' I was told, 'I was thinking maybe an aunt, grandma...' I said, 'Totally! I'd be honoured. And I have to be called AUNTIE-GRANNY. This has to be a thing! Yes, I will be called Auntie-Granny, and I'm totally honoured to be such. Thank you!' We had a good laugh, but all seriousness, though, I'm incredibly honoured to have been asked such. I've always just been adopted in as my friends' children's Auntie. Totally fine with that, too. But I've never been formally asked, and that just left me completely blown away. I'm just... Wow. 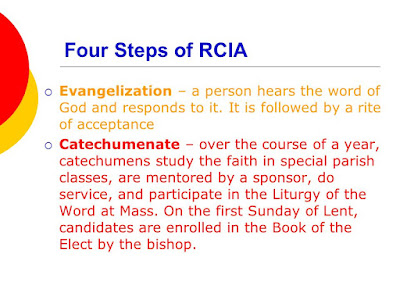 Yesterday - Sunday - I was blessed to be able to participate in what's called the Rite of Acceptance into the Order of Catechumens. I have been trying - desperately - to become a Catholic for a long, long time. This morning, I was brought in not as a Candidate anymore, but as a Catechumen. For those of you reading this who do not know what that means, I am trying to become a Catholic. And this is part of the process. To simply put it: The Rite of Acceptance is kinda like when you go visit a new person for the first time at their home, right, and you're just kind of standing there in the entrance of the house and you're just chatting. That's what this really is. Easter when the Rite of Welcoming happens when we're FORMALLY ANNOUNCED AS CATHOLICS, then that's like when the person of the house you've been visiting with sits you down with them for tea and really getting to know you into a further depth than just the initial conversation. So, this whole thing this morning was the initial, 'Hi, welcome to my home, come on in!' kind of thing. That's my understanding of what happened, anyway. I'm getting closer, however slowly (but that's okay), to becoming Catholic, something I have wanted for over 20 years. I've been thinking about family, and what that word means. I thought about my own children, my brothers, the parents we have. Thought about, too, about how broken my upbringing was, and how people who have broken backgrounds tend to build families of their own by 'collecting' family members on their own, sort of assimilating, if you will, people that they like and hold in pretty high regard enough to want to consider them a brother, sister, even a parent.

Yesterday's special event in my life, my own family - blood family - was not able to be a part of. My brother lives in Oregon, or I'd have asked him to come. I'm sad - but blunt in saying this - to say that I doubt my Mom would have come. I just... really doubt it. I don't know that my brother would've, but I'd like to believe he would've made the time for me. My children in heaven were there, I know, but I would've loved to have seen my daughter that's still alive there, too. Unfortunately, that wasn't the case, and for that, I'm sad, but it got me thinking about how it's interesting how things happened to work out this weekend.

My son's birthday was Saturday. He would've been 23 this year. He passed away in 1996 when he wasn't quite eight months old. I miss him, fiercely. Years ago, when I was in my mid-20s, about 26, I think, I'd said the first time I wanted to go through the Mormon Temple was on my son's birthday. I was about to be 27, my son's seventh was coming up (I had him when I was barely 20). It never worked out that I was able to go through the Mormon Temple (I was Mormon from childhood). It's interesting how things DID end up going for me. I was welcomed yesterday morning as a Catechumen in the Catholic Church - I am not Catholic as yet, that happens later. This is just a step in the process, a crossing over the threshold, if you will, into that. It's interesting that while no, I wasn't able to go through the Mormon's 'rite of passage,' if you will, but I was brought before the congregation yesterday morning, the day after my little boy's birthday, to be welcomed as a Catechumen, no longer a Candidate, on the journey of Faith.

I have a really hard time this time of year because of my son's and oldest daughter's birthdays (and my oldest daughter's anniversary). Plus it's time to start gearing up for the holidays, and my blood family's all out West, and I'm in the Midwest. It's frustrating. And if I'm honest - and I am, to a fault - pretty lonely. But, at the same time, as I said earlier in this post, I tend to 'collect' family. :) I have a small group of people I consider more than just a mere FRIEND, but as a SISTER, BROTHER, and in a couple people's cases, DADS and in one such case: MOM. I do not give those titles lightly, 'Mom,' 'Dad.' Those are terms of endearment, and while yes, I love my own blood Mom, we do not have quite the relationship I wish I could've been blessed with having with her growing up. There's a LOT of bad blood between us that has yet to be granted closure, and I'm sad to say I do not think that's going to happen this side of Glory. As for 'Dad,' 'Father,' yeah...NO. I have a male figure that I was pretty much to call those terms growing up, my Mom's (now ex-)husband, but I do not believe those terms are something I have to use now. I have not called him either one for a long time. I doubt I ever will get round to that anymore, now that I am no longer obligated by not being an adult!

Yesterday's event was every bit as wonderful and beautiful as it was bittersweet for me because I wanted so desperately for my children to be there. I would've loved, too, as I said, for my brother to be there, too. 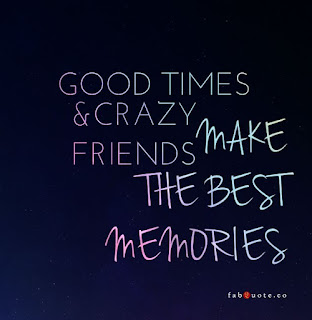 My friend's incredibly wonderful request of me to be her future children's Auntie-Grannie, not only did it come to me as an incredible surprise, it is a conversation I always will treasure. She is like a daughter to me. She and her guy are wonderful people, and I love them as fiercely as I do my own children. We've been neighbours for almost four years, and having them as friends, and more than that, has become such a tremendous thing to me. I've been asked to do some pretty big things for my friends over the years - once I was asked to be a friend's Matron of Honour at her wedding. I told her I wasn't sure what that entailed, but sure, I'd be honoured to do so. Just let me know what she needs me to do, and I'll do it. I've been entrusted the care of my friends' little ones before. Tutoring, babysitting, stuff like that. Which, it may seem like 'no big deal' to some, but to me, that's pretty serious.

Anyway, just some thoughts for you all. I'm going to sign off with this little gem I found by accident one day: 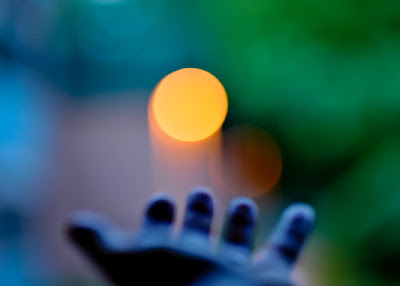 May today there be peace within. May you trust God that you are exactly where you're meant to be. May you not forget the infinite possibilities that are born of faith. May you use those gifts that you have received, and pass on the love that has been given to you. May you be content knowing you are a child of God. Let this presence settle into your bones and allow your soul the freedom to sing, dance, praise and love. It is there for each and every one of us.
Email Post