It begins! Happy November, y'all!

Hello and Happy November (and all that jazz).

Today, Faithful Reader, I'd like to firstly apologize for the lapse in updates. Things here at TabEnd have been a bit hectic (to say the least), but now things are slowing down to a less-chaotic pace, even though NaNoWriMo started just 45 minutes ago. EEK! Not to worry, though, I've got myself (mostly) prepared this year. Notice I didn't say all the way. Ha. 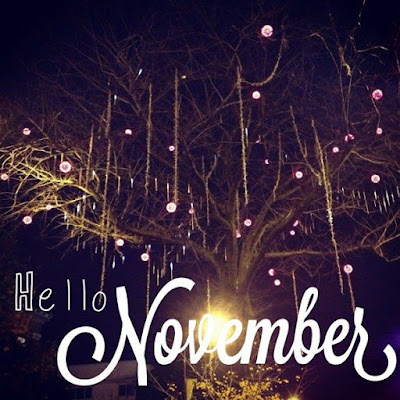 Anyway, I want to discuss something with you that's pretty important to me: What to do when your world's too loud. I mean constant conversation, constant phone ringing, people knocking without having called first, kids driving you up a wall (And in my case, pets. Seriously, my cats have decided that gravity is something to really toy with today, and my dog has decided to be extra stubborn)...

Maybe you have someone who likes to call you multiple times a day for the same topic that should've been discussed once and dealt with and then moved on from. Maybe they can't take the hint when you don't answer and rather than leaving a voice mail (which would be the smart and polite thing), they insist on blowing you up through text messages. Or, worse, and far more rudely: showing up at your door when clearly you've tried to avoid being bothered through the phone. Rude, right?

What about those of you, who like yours truly, who have dogs and neighbours who like to wander aimlessly in front of your windows, aggravating your household and making your dogs bark?

Short of packing up and moving to an undisclosed location, changing your number and giving it only to those who can respect your time and space, and short of sticking rudely phrased notifications on your door for those who clearly can't be mindful of your space and time and closing the blinds and windows, I've got a few solutions that might help.

Just... hear me out. No, you there, in the back, taking a hammer to your phone isn't the answer. Put the hammer down, dear, just have a seat, enjoy a cuppa and hear me.

DISCONNECT FOR AWHILE FROM OTHER HUMANS.
Unplug your phone! Yes, seriously. If you have a land-line, there's not a blessed thing wrong with unplugging for a while. Rude people can suck it up or they can go leech off someone else's energy. I promise you, the world isn't going to crash and burn because you're not there to save everyone who thinks that YOU'RE the only one who can help. I'm sure they've got others they can go annoy. Let them do that. YOU TAKE CARE OF YOU.

If you don't have a land-line, but you do have a mobile phone, turn it off. You don't have to have it on all the time. As said above, let the rude people go leech off others for a while. YOU TAKE CARE OF YOU.

Social media (Facebook I'm looking at YOU, specifically here) can be not only a huge time suck but a trigger in raised blood pressure. Keyboard warriors, and other special little snowflakes who like to cause trouble... Don't give them what they want. They don't deserve the satisfaction of sucking you into their petty b/s. All it's going to do is make you sick and miserable. And honey, trust when I tell you: You don't need that kind of negativity in your life!

There's no law that says you have to be readily available 24/7/366. Trust me. And if there is, well, screw whoever made such a dumb law, because seriously? No.

READ A BOOK.
I'm sure, if you're reading this, you like to read on some level or another. Grab a magazine, a book, a comic book, hell even one of those supermarket rags by the registers. Turn the telly off. Turn the radio off. Put up a sign on your door that says don't bother you. Phrase it however you think will get the point across that you are not to be bothered for a while, and get in touch with an old favourite novel or author. You won't regret it!

WRITE.
I'm serious. Sit down and write about your day. Write about what you're thankful for, big or small. Start a blog. Start one of those little online diaries (http://www.dreamwidth.org is a good one, it's free, easy to use, and fairly inclusive, it's US-Based).

LISTEN TO RELAXING MUSIC.
If you're wanting to not be bothered with humans, but you don't want to be in total silence, there's music that doesn't have lyrics, but it's fairly relaxing. Here's one of my personal favourite go-to's for music that'll relax me.

NOISE-CANCELLING HEADPHONES
I need to, personally, invest in some of these. Especially for work. As a writer, I pretty much work where (and when) I feel like, but it seems like when I sit down to do some writing, that's when everyone and their pet goat wants something of me. The earbuds I have currently are a dream, they're paracord, but I'd like to have some of those noise-cancelling ones because then it'll be obvious to people to leave me ALONE. ;)

HAVE A REALLY GOOD, CLEANSING CRY
If you're like me, you really don't give yourself time to just let go of pent-up emotions until you're by yourself. Trust me, I get it. You don't want to be given a weird look or some judgmental comment hurled your way by a 'well-meaning' loved one. Oh, honey, I've been there! Trust me! There's absolutely nothing whatsoever wrong with taking time out and just going somewhere where you can just LET IT OUT. Scream, cry, rage until you have nothing left, but please, don't bottle it up!

MEDITATION
This isn't some sort of New Agey type thing, I promise! Nah, this is more like just taking some 'you' time and sitting down somewhere quiet, and just…. Not thinking about anything. Not trying to be anywhere but where you currently are, whether it's your armchair in your living room, or laying on your bed and focusing on your breathing. Trust me, this works wonders.

GAMING
If you're into video games or even TTRPGs like Dungeons and Dragons, Rifts, or a rousing game of Magic: The Addiction Gathering, gaming gets you in touch with your creative side, and in some situations, your problem-solving side. I played Vampire for a long time, and that was a blast. I eventually got into other WOD games, and then later moved over to DnD for a bit. Whatever had made me aggravated during the week, I just had my release during those gaming times with my buddies. I've since discovered boxing on my Wii. It's a lot of fun, and while I look completely ridiculous doing it, it's a great way to get the blood circulating and the endorphins racing. My husband likes those 'shoot 'em up' type games, like Call of Duty, Red Faction, and now he's figuring out a different game called Fall Out. Whatever gaming you fancy, it's a great way to release some of that stress…….without catching a case with the local LEOs. ;)

GOING TO A QUIET ROOM JUST TO CATCH UP WITH YOURSELF.
There's also the tried and true method of going into another room to be alone for awhile. In this post, I talk about an 'Emergency Self-Care Kit' and go into examples on what to put in one. I didn't invent this little gem on my own, though I certainly didn't hesitate to put one together once I'd learned about it on Pinterest.

PUT ON LOUD MUSIC
A friend and fellow author earlier gave this suggestion, saying it's the only loud she can control. I concur, but at the same time, sometimes even my aggressive tunes are too aggressive. Don't look at me like that. I'm serious. Sometimes I don't want to listen to stuff like Def Leppard or Rob Zombie. Sometimes I'd rather just chill with some Alanis Morissette or some Janis Joplin, maybe some Sheryl Crow or Pam Tillis (how's that for old school, eh?). If you look at my Spotify, my taste in music's pretty all over the place. Seriously, I've scared people with how erratic my taste is. Ha. Currently, as I'm writing this at 1.20 in the morning, I'm listening to Matchbox Twenty. I was just listening to Diary of Dreams. Earlier, I was listening to Johnny Cash and Willie Nelson serenade me about 'Highwaymen,' and then it segued to AC/DC's 'Highway to Hell.' Real nice, eh? My point is, it doesn't matter what genre you listen to, if you like music, turn some on if that's what's going to make it easier to get through the day. If you'd rather listen to something a bit more calming, I cannot endorse Dr Jeffrey Thompson's work enough. I've been listening to his music for years, and it's been amazing how effective it is.

EAR PLUGS
So you've perused the above list, and nothing's jumping out at you as the 'it' thing to try. How about this: If you're in serious need of quiet, and nothing is just gonna get the job 100% done for you, go to the local pharmacy and pick up some earplugs. They're not really expensive (I used to buy these a lot when I was with my ex, he snored so loud, it kept me up for days it seemed), and they do work. I recommend the silicone ones. They mould and shape to your ears, they're soft, and they're safe. Now, if you're more a foam type person, they're pretty inexpensive, too.

WHITE NOISE GENERATOR
If you aren't sure what you might need, be it music, earplugs, or whatever else, here's a great suggestion another friend recommended: white noise. Yeah, I know. There are some paranormal researchers out there who use this type of technique to speak with whatever entity or whatever's wreaking havoc in a client's home, so they can touch base with it and get it to knock it off (hopefully). But… White noise isn't just for that. It's basically like running your fan at night so you can sleep. It's just...without the cold air blowing on you while you're snoozing.

So, I ask you, and I'd love to hear in the comments, what do you do when your world is too loud to cope with?
Email Post