Nine more days.  Nine.  I can't believe it.  This year's flown by so quick! 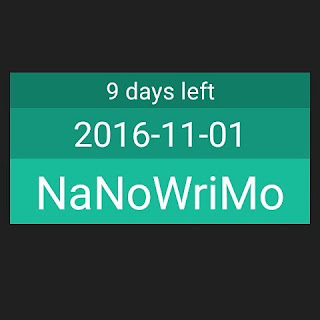 Here we are, just a little over a week to go, and then it'll be time for NaNoWriMo 2016.  Next week, my husband and I are going to work on a list of stuff to get, grocery shopping wise, to get meal prep started, so all we have to do is just grab it and fix it.  I'm feeling pretty confident, though, that this is going to be a good month for me, given that I survived JuNoWriMo (mostly) unscathed, and Camp NaNoWriMo was a bit of a bust (thank you, scary neighbour guy).  But this coming month, yeah.  I'm ready.  Gotta jot down my notes for research stuffs, I've got a "self-care" book put together that I'm going to add more stuff to here in a bit, and I'm paying a girl to help with housework so I don't have to worry about too much other than taking care of my pets, the outdoor cats, and writing.   I'm still debating on how to do the timeframes, though, for each day.  Do I tackle this like a job, where it's a block of time each day, and then the rest of the day is for other things, or do I just go by the seat of my pants?

The novel itself, I have to plan out.  It's a must.  I can't be a pantser with this one, because of the direction the story took me into unfamiliar territory from the other side of the pen than I'm used to being on pertaining to this topic.  Much editing will happen when it's all done, though, I just need to get it out of my head and onto paper, and typed and whatever other means necessary, but I need it to come OUT.

If I'm honest, though, I have to confess something.  I'm more than just a bit apprehensive about this topic, because of two things:  1) I'm not really one to write about this stuff (as previously stated, I'm used to watching it in bad Lifetime movies [don't judge, alright, Lifetime and LMN are both guilty pleasures of mine] or reading about it in books and news articles.), and I'm a bit concerned with how it's going to turn out, given this is quite foreign territory to me, and 2) I'm not sure how on earth to tackle this!  If I start where I've chosen, and stick with it, and then flip the perspective to the other character's perspective for HER side of things, and then flip it back once the reader's brought up to speed on what on earth just happened at the beginning, sorta to tie it all together?  And the ending, what of the ending?

Questions.  So many questions.

I've got a little over a week to decide, though, so that's at least a little breathing room, right?  So, for now, I will go back to what I was originally planning to do in getting my "pep talks" I've printed (little affirmations and encouraging quotes and the like) randomly and strategically placed throughout the apartment.  Something I should've done in June, but that's alright, I'm at least tackling it now, and that's what matters, right? 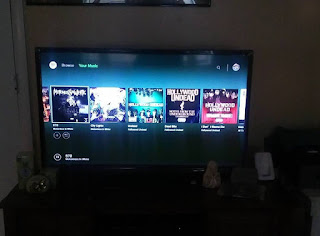 Oh, and there's this little thing I just did a few minutes ago.  I got sick of Spotify crashing on my laptop, causing my entire system to lock up and having to do a hard boot all the time.  So, I downloaded the Spotify app to my husband's PS3 I got him for Christmas last year, and entered in my login information and now I'm using the telly as sort of a music station.  This way I can listen to music on a bigger screen and not have to argue with crashing my computer and risking it crashing for good.  I have a warranty on my laptop, I bought an extended warranty, HOWEVER there might be a tiny problem with that because a year ago I scrubbed Windows off my hard drive and ran screaming to a different OS where I've been happier.  SO, not sure if I voided the entire warranty or just the software part.  Ah, well.  It's alright.
Email Post
Labels: camp nanowrimo creativity fiction honesty husband junowrimo muse music nanowrimo not a techie spotify writing